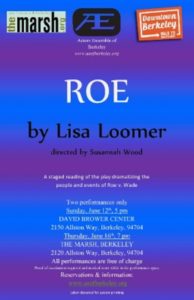 Actors Ensemble of Berkeley, with support from The Marsh Berkeley, Berkeley Councilmember Susan Wengraf, and the Downtown Berkeley Association, present a staged reading of ROE, by Lisa Loomer, directed by Susannah Wood.

Two performances only, Sunday June 12th, 5 p.m., at the David Brower Center, and Thursday June 16th, 7 p.m., at The Marsh, Berkeley.  All performances are free of charge, but reservations are encouraged.  You must present proof of vaccination and the audience will be required to wear masks during the performance.   The performance on June 12th will feature ASL interpretation courtesy of the East Bay Gray Panthers and other private donors.

Roe v. Wade, the landmark 1973 case that legalized abortion, is still fiercely debated over forty years later. In this incisive play, acclaimed writer Lisa Loomer cuts through the headlines and rhetoric to reveal the divergent personal journeys of lawyer Sarah Weddington and plaintiff Norma McCorvey (“Jane Roe”) in the years following the fateful decision. In turns shocking, humorous, and poignant, ROE reflects the polarization in America today while illuminating the heart and passion each side has for its cause.

Produced by Actors Ensemble of Berkeley and Carole Marasovic of the City of Berkeley Commission on the Status of Women.  Actors Ensemble is the longest-running theatre organization in Berkeley, founded in 1957. We aim to produce quality theatre emphasizing the ensemble, with a community flavor.